An important decision for state motorists,

Chief Minister Vijay Rupani has instructed to impose higher fines on vehicles seized under enforcement, surveillance by the police in the state in the circumstances of the current Corona transition.  In this context, Chief Minister Rupani said that a large-scale 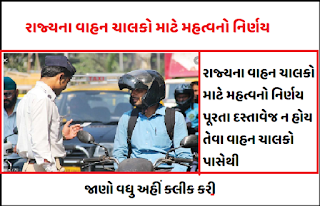 campaign of surveillance is being carried out by the police for the mandatory wearing of mandatory masks in the global epidemic of Corona and for its intensive implementation.
Extensive representations were made to the Chief Minister that in the time of Koro, the citizens who used to bring their relatives for treatment often did not have enough documents of their vehicles available in two wheelers and three wheelers as well as four wheelers.  In such circumstances, the vehicles of such drivers are confiscated as per the RTO rule and the process of releasing them takes a long time.
Responding to these representations, the state government has decided that higher fines will now be levied for such vehicles.  Accordingly, for two wheeler and three wheeler vehicles Rs.  500 and for four wheeler vehicles Rs.  A high fine of Rs.1000 will be levied.  The decision has come as a great relief to motorists who rush to their relatives for treatment during the Corona transition.  Not only that, from now on, the required documents for such vehicles can be submitted in 15 days.
The state's Department of Vehicle Affairs has issued a notification in this regard, according to which police officers in the state will be able to levy these hefty fines for vehicles detained under the Motor Vehicle Act-17 as a strict measure of Covid-12 transition control.

source by  source by :https://gujarati.news18.com