Downloading this APP will take place in the bank account 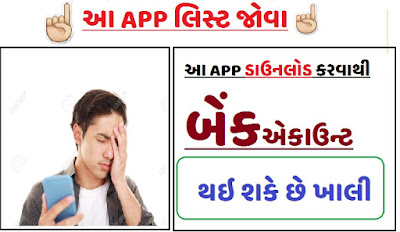 Let me tell you, if you install one of the 8 apps in your phone, you will have to enter your phone number or e-mail in it. The hacker will use it to get all the information associated with your bank account. After which it will be easier for them to hack any bank account. In the blink of an eye, the rupee will reach the hacker's account from your account.

Delete these apps from your phone immediately to avoid hacking

According to research, hackers get all the information of the bank with the help of the code that comes to your phone for verification. In the meantime, all the money from your bank account goes to the hacker. This app installs MRAT in your phone and you don't even know it. MRAT gives you permission to access your phone from another location. So that a Basel person in any corner of the world can control your phone.

Let me tell you, Clast82 is a Malware Dropper, which first attacks your Android phone. And another program called AlienBot Banker hacks your bank account by taking all the important information inside your phone with finance apps like Google Pay, Paytm, Phone Pay.

According to the information received, hackers have created two new viruses, which come in handy to hack Android phones. Both viruses are called Clast82 and AlienBot Banker. This program only targets apps connected to finance.