Education Minister Bhupendrasinh Chudasama has made a big announcement regarding schools today. Education work in standard 10 and 12 will be started from January 11.

The state government has taken an important decision to start education in Gujarat. The teaching work in standard 10 and 12 will start from January 11. Education will be started in the last year of PG and UG. 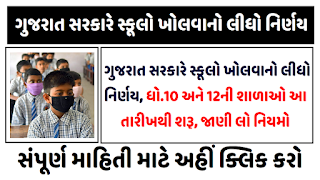 Other standards will be decided in due course
The Education Minister said that a decision will be taken in the near future for standards other than Std. 10 and 12 considering the situation. Currently, schools will be started for both these standards and the rules will be followed based on the SOP of the Center. Although schools will open, online education will continue. However students will be required to wear a mask at school. As well as the SOP of the Central Government will have to be compulsorily followed in the school.

Important things
👉OFFICIAL PRESS NOTE : CLICK HERE
👉 VTV GUJARATI NEWS : CLICK HERE
Education Minister Bhupendrasinh Chudasama said that the educational work of Std. 10 and 12 and the last year of graduation and post-graduation will be started in the state from January 11, 2021. The decision was taken by the state government after a meeting of the state cabinet chaired by Chief Minister Rupani and Deputy Chief Minister Nitin Patel. Giving more details in this regard, the Education Minister added that the decision would be applicable to all the boards in the state, including government schools, grant-in-aid-self-help organizations and institutions under the Department of Social Justice Empowerment. Schools and colleges will have to strictly adhere to the SOP announced by the central government to prevent the transmission of corona. All the instructions have been sent by the education department to all the institutions, Chudasama said.