In the midst of the Corona Epidemic, several states in the country have banned the use of fireworks to prevent pollution. Rajasthan, Delhi, Madhya Pradesh and other states have a complete ban on fireworks, although the Gujarat Government has allowed fireworks in the state subject to conditions. Foreign fireworks will be banned. The state government had also directed all the collectors and police commissioners in the matter. Now the commissioners of several districts of the state including Surat and Ahmedabad have also issued declarations. 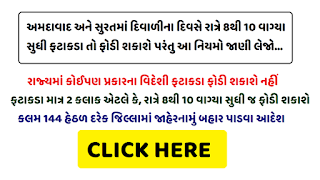 The state government has banned fireworks coming from abroad, not home-made fireworks. That means anyone who has bought fireworks is thinking of doing so. He has been allowed to blow up fireworks, as per Supreme Court guidelines. Then the police commissioners of Surat and Ahmedabad issued a notification.
On the day of Diwali, it can be broken only from 8 to 10 pm
As per the directive issued by the government, no foreign firecrackers can be set off in the state, for which all collectors and police commissioners have to be careful. It has also ordered to issued a notification in each district under section 144. However, according to the Supreme Court's guideline, firecrackers made in the country can be blown up. But these firecrackers can only be fired for 2 hours i.e. on Diwali day from 8 to 10 pm. According to this decision of the government, one thing is clear that people's Diwali will not go bad like Janmashtami and Rathyatra.
Directs all collectors and police commissioners of the state government on the issue of fireworks
The State Government has also directed all collectors and police commissioners to ensure that foreign fireworks are not sold in the stat. Ordered to issue notification under section 144. Ordered to stop the sale of foreign fireworks. Fireworks are allowed as per the guideline of the Supreme Court. The Supreme Court has been ordered to implement the guideline.
Surat Police Commissioner's notification regarding bursting of firecrackers
Following the state government's order on Diwali, the Surat Police Commissioner has issued a notification. Fireworks can be set off only between 8 and 10 pm. Fireworks are banned in public places, markets and hospitals. The will be a ban on bursting fireworks. Only fireworks with less than 125 decibels will be allowed to be sold and blown up. Import of foreign fireworks is also banned. The commissioner has instructed to implement the declaration.
Ahmedabad Police Commissioner's announcement regarding Diwali Festival
Ahmedabad Po. Firecrackers can be set off in Ahmedabad from 8 to 10 pm, the commissioner said in a statement. Firecracker looms are banned. No more than 125 decibels can be fired. Fireworks will be banned within 100 meters of the hospital, nursing home, No fireworks near health center, educational institution, court. Fireworks will be banned on public roads and near petrol pumps. The import and sale of foreign fireworks is also banned. Ordered to implement the declaration from 9 November to 19 November. Online companies have also been banned from selling crackers. Ahmedabad police has given relief to small traders.
👉NEWS REPORT : CLICK HERE
Importantly, the government has not banned the firing of fireworks here. But should we spread firecracker pollution on Diwali? Should we spread the corona by spreading pollution? This thing people need to understand now. Hopefully, despite the government's permission, people will not firecrackers to protect themselves and thousands of other families along with their own.
Ban on online sale of fireworks in Ahmedabad
The Commissioner of Police has banned the sale of fireworks online in Ahmedabad. Local traders have been relieved by the ban on online sale of fireworks. Traders have welcomed the decision of the Commissioner of Police in this situation where online sales were causing losses to traders.