The Situation is becoming more interesting as the result of the US presidential election is approaching. Not only that, but a record has been set in Biden's name. Biden has become the first candidate to receive the most votes in US history. He has also broken Obama's record. Biden has received 7,15,57,235 votes so far. 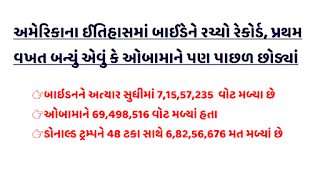 Biden, who served as vice president under the Obama
Administration, has received 7,15,57,235 votes so far. In the 2008 US election, Obama received 69,498,516 votes. Millions of votes are sill being counted for the 2020 elections. Biden's vote so far is 50.3 percent of the total votes. Republican candidates Donald Trump, on the other hand, received 6,82,56,676 votes with 48 percent.
Winning the US presidential election requires 270 or more electoral votes. So far, Biden has received 264 votes and Trump 214 votes. Of those, Trump has won in 22 states and Biden in 20. While the results of eight states are yet to be declared. The total number of electoral votes in the states where the results have not been declared is 77. The future of Trump and Biden and the United States depends on these states. The votes of these states will play an important role in determining the President of the United States.
👉 US Live Result : Click Here
👉News Report : Click Here
Joe Biden to West Virginia, Washington, California, Colorado, New Hampshire, District of Columbai, New York, New Mexico, Vermont, Connecticut, Delaware, Illinois, Maryland, Massachusetts, New Jersey, Tennessee, Mineapolis, Tennessee, Minnesota and Rhode Island.
Trump in Idaho, Lowa, Florida, Sauth Dakota, Missouri, Louisiana, Nebraska, North Dakota, Arkansas, Alabama, Mississippi, Montana, Ohio, Oklahoma, Tennessee, Kentucky, West Virgina, Wyoming, Texas, Wyomig, Texas Have won.
Trump ahead on 54 electoral votes from 4 key states.
Donald Trump is currently leading in 4 key states. Trump is ahead in Georgia, Pennsylvania, North Carolina, Alaska, There are 16 electoral votes in Georgia and 15 in Carolina, 20 in Pennsylvania and 3 in Alaska. If Trump wins in these 4 states, 3 electoral votes will be far from the majority.